To perform a systematic survey on the occurrence and removal of micropollutants during municipal wastewater treatment, 943 semi-volatile organic chemicals in 32 wastewater samples including influents of secondary treatments, secondary effluents and final effluents (effluents of advanced treatments), which were collected from seven full-scale municipal wastewater treatment plants (MWTPs) in China, were examined by gas chromatography-mass spectrometry (GC-MS) coupled with an automated identification and quantification system with a database (AIQS-DB). In total, 196 and 145 chemicals were detected in secondary and final effluents, respectively. The majority of the total concentrations (average removal efficiency, 87.0%±5.9%) of the micropollutants were removed during secondary treatments. However, advanced treatments achieved different micropollutant removal extents from secondary effluents depending on the different treatment processes employed. Highly variable removal efficiencies of total concentrations (32.7%–99.3%) were observed among the different advanced processes. Among them, ozonation-based processes could remove 70.0%–80.9% of the total concentrations of studied micropollutants. The potentially harmful micropollutants, based on their detection frequency and concentration in secondary and final effluents, were polycyclic aromatic hydrocarbons (PAHs) (2-methylnaphthalene, fluoranthene, pyrene, naphthalene and phenanthrene), phosphorus flame retardants (tributyl phosphate (TBP), tris(2-chloroethyl) phosphate (TCEP) and tris(1,3-dichloro-2-propyl) phosphate (TDCP)), phthalates (bis(2-ethylhexyl)phthalate (DEHP)), benzothiazoles (benzothiazole, 2-(methylthio)-benzothiazol, and 2(3H)-benzothiazolone) and phenol. This study indicated that the presence of considerable amounts of micropollutants in secondary effluent creates the need for suitable advanced treatment before their reuse. 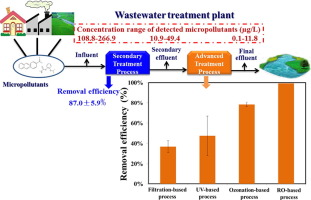