Morphology, composition, and sources of individual aerosol particles at a regional background site of the YRD, China

Aerosol samples were collected at Lin'an, a background site of Yangtze River Delta (YRD). Morphology, size, composition, and mixing state of individual aerosol particles were characterized by transmission electron microscopy (TEM) coupled with energy dispersive X-ray spectroscopy (EDS), and the soluble ions of PM1.0 were studied by aerosol mass spectrometer (AMS). The daily average AMS mass concentrations of sulfate, nitrate, and ammonium were about 5.8, 8.6, and 5.6 μg/m3, respectively. Individual aerosol particles were classified into seven types: S-rich, K-rich, organic matter (OM), soot, fly ash, metal, and mineral. S-rich particles were dominant in all size bins, and 51% (by number) of S-rich particles were internally mixed with other particles. The fraction of organic coating particles was 13.7% in morning, 25.2% in afternoon, and 11% in evening, suggesting that the strong photochemical process during afternoon produced more secondary organic aerosols (SOA) on the surface of inorganic particles. Fly ash and metal particles were abundant during the day, suggesting the influence of emissions from coal-fired power plants and steel plants. The results indicate that the intense industrial emissions in the YRD significantly transported to the background areas. PM2.5 concentration may be lower in background air than in urban air but complex mixing state of aerosol particles indicates that the long-range transported particles substantially influenced the background air quality. 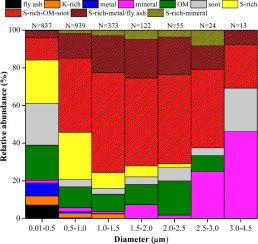