The emergence and prevalence of antibiotic resistance genes (ARGs) and pathogens in the environment are serious global health concern. However, information about the occurrence of ARGs and pathogens in recreational water is still limited. Accordingly, we investigated the occurrence of six ARGs and human pathogens in three recreational lakes, and the correlations between ARGs and one mobile genetic element (intI1) were analyzed. The quantitative PCR results showed that the concentration of ARGs ranged from 4.58 × 100 to 5.0 × 105 copies/mL in water and from 5.78 × 103 to 5.89 × 108 copies/g dry weight (dw) in sediment. Sul1 exhibited the highest level among the five quantifiable ARGs. The concentrations of sul1, bla-TEM, and tetX exhibited significant positive correlations with intI1 (p < 0.05), indicating that intI1 may be involved in their proliferation. The detection frequencies of ARGs ranged from 75%–100%, indicating the prevalence of these risks in this region. The concentration of Escherichia coli, Aeromonas spp., Mycobacterium avium, Pseudomonas aeruginosa, and Salmonella enterica ranged from 103 to 105 copies/100 mL in water and 104–106 copies/g dw in sediment. In total, 25% of the samples harbored all pathogen genes, indicating the prevalence of these pathogens in recreational lakes. Furthermore, the next-generation sequencing results showed that 68 genera of pathogens were present, among which Aeromonas, Mycobacterium, and Pseudomonas were the dominant ones in this region, posing a considerable potential health risk to public health. Overall, the widespread distribution of ARGs and pathogens underscores the need to better monitor and mitigate their propagation in recreational lakes and the associated risks to human health. 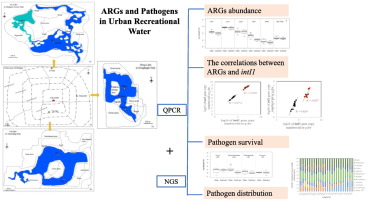