In order to study the concentrations of major components, characteristics and comparison in hazy and non-hazy days of PM10 in Beijing, aerosol samples were collected at urban site in Beijing from December 29, 2014 to January 22, 2015. Heavy metals like Zn, Pb, Mn, Cu, As, V, Cr and Cd were deeply studied considering their toxic effects on human being; nine water-soluble inorganic ions (SO42−, NO3−, NH4+, Na+, K+, Cl−, Ca2+ and Mg2+) and carbon fractions (OC and EC) were also analyzed. The concentrations of heavy metals were 1.03–1.98 times higher in hazy days than those in non-hazy days, mainly due to biomass burning and coal burning. The trends in total heavy metals concentrations were basically consistent with the trends in PM concentrations except for two obvious periods (12.29–12.30; 1.14–1.15); but when air masses accumulated locally or around Beijing, trends in PM concentrations and heavy metals were opposite. The proportion for NO3−/SO42− indicated that mobile sources such as automobiles were important reasons for haze in Beijing. Correlation between OC and EC during non-hazy days was strong (R2 = 0.95) but it was low (R2 = 0.67) during hazy days, and large variations for OC/EC values occurred in hazy days. The calculated mass concentration of SOC is 2.58 μg/m3, which only accounted for 10.1% of the OC concentration. When air masses from the far north-west, they decreased PM concentration in Beijing and they were relatively clean; however, those from the near east, south-east and south of the mainland increased PM concentration and they were dirty. 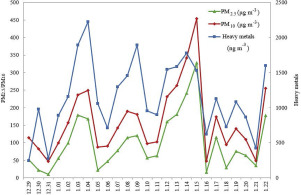